The Committee and  Members  of Collegeland O’Rahillys GAC  deeply regret the death of  Bernie Clancy (RIP), Club Vice President. Bernie Clancy and her family have been very active in our Club since its formation through to the present day; her husband Joe ( RIP) was an esteemed founding member; and members of the Clancy family continue their involvement today as Committee members and players so we offer our sympathies to all the family, to  Ann, Mary, Eilish,  Eileen, Deidre, Pauline, and Kevin;  and also to the grandchildren, great grandchildren and great great grandchild.    The O’Rahillys were well represented at the funeral and formed a guard of honour along with St Peters School Collegeland pupils .   Many of the older past-pupils in the area will remember “ Mrs Clancy” the kind dinner lady in Collegeland school who knew every child and what vegetables they liked or more often didn’t like and who would often quietly go out of her way to cater for the fussy eaters. As Fr Eugene Sweeney said her apple sponge and custard was  legendary as was her kindness to her neighbours and friends across the community.   Mary Queen of the Gael Pray for her.

Collegeland’s Div 3A league refixture with Derrynoose on Friday 26 th April was played at the Fr McKnight Memorial Park.  The weather for the evening game was dry and  a strong breeze aided the Collegeland men in the fist half.

On the restart Derrynoose had the first score of the before Mickey Cullen had one for the home side. Both sides then had scores, 3 by the visitors and four by Collegeland from Paul Cullen, Tom Murphy, and Paul Cullen, and Brian Mc Geary left Collegeland leading by 7 midway through the  half. Derrynoose then got a grip of the game and a point followed by a goal narrowed the gap to 3 points.  Two points in as many minutes saw Derrynoose just trailing by one point.   A Tom Murphy point in the 23rd minute stretching the lead slightly was enough for a Collegeland win although a late Derrynoose point was not enough to get them a share of the spoils.  FT Collegeland 0-14 Derrynoose 1-10. This was a good win for Collegeland but will be wondering why, with the game won, they let Derrynoose back in to the game. A word of praise to our defence who held firm in the final ten minutes.

This Friday night 3 May in Collegeland sees Forkhill as visitors.   Both teams are off to a great start with 3 wins out of three matches. So it will be a very interesting evening.  The Belleek away game postponed from last Sunday is likely to be played on Fri 10 May.

Saturday 4 May is our Golf outing to the Brackaville Par 3 course so hurry and book your place.  Talk to any player or Committee Member , its only £10 per person with a reduction for couples and families.

Last Sunday both teams were getting ready to play football in our home Junior A League but that was before the heavy downpour just before throw-in leaving the pitch unplayable so the refixture is on this Fri night, 26 April, at 7.15pm for Collegeland v Derrynoose.

The first outing for Collegeland Reserves is in Silverbridge on this Wed night, 24 April, at 7.15pm.

Then on Sunday 28 April the scheduled Junior A League tie is an away match to Belleek at 2pm.

Golf Outing on Sat 4 May

Preparations are well in hand for our first ever Golf Outing on Sat 4 May. This is a player-led initiative so we would appeal to their friends and families and the wider community to give them support. We are starting with a easy day out at Brackaville Par 3 Course and hope to attract those who do not normally get the chance to play much golf. £10 each or a £17 for couple. Family groups are especially welcome at £30 for 2 adults and 2 children. See Facebook and the Club website for details or contact Frank Donnelly on 077 5180 3050.

The Club is taking orders for merchandise, because of O’Neills minimum order policy this may only happen once this year so please get your orders in soon, stating quantities and sizing.

All items are O’Neills products and come printed or embroidered with the club’s badge.

* Kit Bags are £27 fully printed and personalised – the minimum order is for 6 and we have 5 on order already so this order will soon be processed – get your order in now!

Collegeland GAC are running a Community Golf Classic and Family Fun Golf outing on Saturday 4th May.  Entry is open to all Club members (whether you can hit a golf ball or not).  This is sure to be a great day’s craic with spot prizes on the day.  Click the poster below to view and keep coming back over the next couple of weeks for more information about the day.

Note: You must supply your own golf balls, but extra lake balls will be available to purchase on the day.  If you do not have any golf clubs then tell us when you are buying your tickets and we will try to help.  Again if members have a spare set or half set of clubs then let us know if you can loan us them for the day.

To register for event, contact any committe member or senior team player. 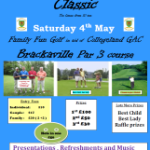 Collegeland hosted St Michaels Newtownhamilton on Sunday 14th April at the Fr Mc Knight
Memorial Park in a Junior Football League Div 3A Fixture. The overnight rain left the
ground just about playable following a pitch inspection prior to the throw in.

The wind was blowing left to right into the Charlemont end of the pitch. St Michaels playing
with the wind at their backs opened the scoring with a point after 2 minutes. Collegeland
replied with points by Jack Mc Geary and Brian Mc Geary ( 2 ) to lead 3 to 1 after eleven
minutes of play.

The Newtown men then added four points in a row to lead by 2 after twentyfour minutes
of play. Two Collegeland scores by Ruairi Mc Geary and Tom Murphy tied the scores at the
break 0-5 to 0-5.

With the strengthening wind and variable gusts the second half saw scores even harder to
come by. A Tom Murphy score nudged the home side in front after six minutes. However
eight minutes later St Michaels drew level around the three quarter mark. Brian Mc Geary
hit two difficult frees in the 16th and 21st minutes to edge Collegeland in front. The St
Michaels men did float over a great point but Collegeland held on to win by the narrowest
of margins 0-8 to 0-7.

Both teams found it tough going at times the conditions made good football a lottery.
Well done to all the players of both teams who tried their best and made it a competitive and
entertaining game. A special word of thanks to Referee Rory Robinson for dealing well with
the difficult conditions and allowing play to flow where possible.

Wed 17th April regular weekly training for all ages from 6.30 to 7 30.
Special training session on Thurs 18th April for under 14s from 5-45 to 7pm with county
Camogie Development Officer.
Parents, especially mothers or maybe aunties, or older sisters or cousins, we really do need
more help at camogie training – with around fifty girls on a Wednesday night it’s not always
easy. We understand if you don’t want to coach but then maybe you can help the girls with
out with helmets, boots, water, toilets etc. Please don’t wait to be asked individually,
please just come along, introduce yourself to the coach and ask what they need you to do.
Thank you.
NAOMH  EOIN

Nathan Carter Tickets
Special Deal for anyone who has helped out in the past year or willing to be involved this
year, if you have helped us then maybe we can help you see Nathan Carter in Armagh,
contact Frank Donnelly NOW on 077 51803050

Collegeland had Tullysaran as vistors to the Fr Mc KNIGHT MEMORIAL Park on Sunday 7th of April for their opening Junior league div 3A fixture. The evening was dull and cold. Tullysaran opened the scoring with 3 points inside ten minutes. Collegeland drew level with points by Jack Mc Geary and Brian Mc Geary 2 by the 21st minute. The vistors then added two points to lead by two.Jack Mc Geary narrowed the gap to a point at the break to trail 0-5 to 0-4. Collegeland had also had a penalty saved by the Tullysaran keeper. On the restart The vistors had a point in the 2nd minute but Kevin Mc Nicholl replield a minute later for the O’ Rahilly’s. Tullysaran sent over for their second point of the half after five minutes. Collegeland then started to take control of the game. Colegeland then had points by Jack Mc Geary, Brian Mc Geary 3 frees,and Jack Mc Geary to lead 0-10 to 0-7 mid-way through the half.A Tullysaran point failed to stem the tide. Brian Mc Geary pointed from played. Jack Mc geary had Collegelands 12th point of the game with eight minutes left. sixty seconds later a long ball in to the small square saw Jack MC geary punched the ball to the net to put the game beyound doubt. Brian Mc Geary added the home sides final score. but the vistors had two late points to leave the final score Collegeland 1-13 Tullysaran 0-10 Well done to the team managers Seamus Murphy and Brian Morris and not for forgetting the players on sunday. > Fixture Sunday 14th April Junior League Div 3A Collegeland v St michaels Newtownhamilton in Collegeland at 2PM .